Event Streams and Monads in the Cloud 👨🏾‍💻🍹

Repost 🔃 Kafka Streams: a road to Autoscaling via Kubernetes

There are many reasons for working on community contributions such as a blog post, a demo, or a talk. Sometimes, you produce those contributions to share something that you’ve learned at work. But sometimes, the contribution itself can be a way to learn and experiment something new. I was in the second case when I worked on the article Kafka Streams: a road to Autoscaling via Kubernetes.

Kafka Streams: a road to autoscaling via Kubernetes

At that time, I was working for a consulting company, and my client was running one of it’s first real-time project on Apache Kafka®. We were developing a Kafka Streams application meant to be deployed on three virtual machines to process data from ~12 partitions. We were satisfied with how these instances handled the normal workload. However, in some situations, we wished we could be more flexible and easily add more deployments. Issues like crashes; restarts; upgrades led to significant increases in the record lag. Meanwhile, our colleagues were all converted to the same sect: Kubernetes. So I started to ask my self: “can we address this particular problem with Kubernetes”. And that’s how I’ve started to explore Kubernetes custom metrics API.

Basically the demo: xke-kingof-scaling brings a random data generator, a Kafka Streams application and a minimal infra (declared with Terraform) to recreate the use case and highlight the issue I was trying to address. The project was running on GCP, and the Kafka cluster used was on Confluent Cloud. The first deadline for this hack project was actually a presentation. I had to present the talk Scale in / Scale out with Kafka Streams and Kubernetes 🎞 🇫🇷 at the 2018 Edition of Xebicon. 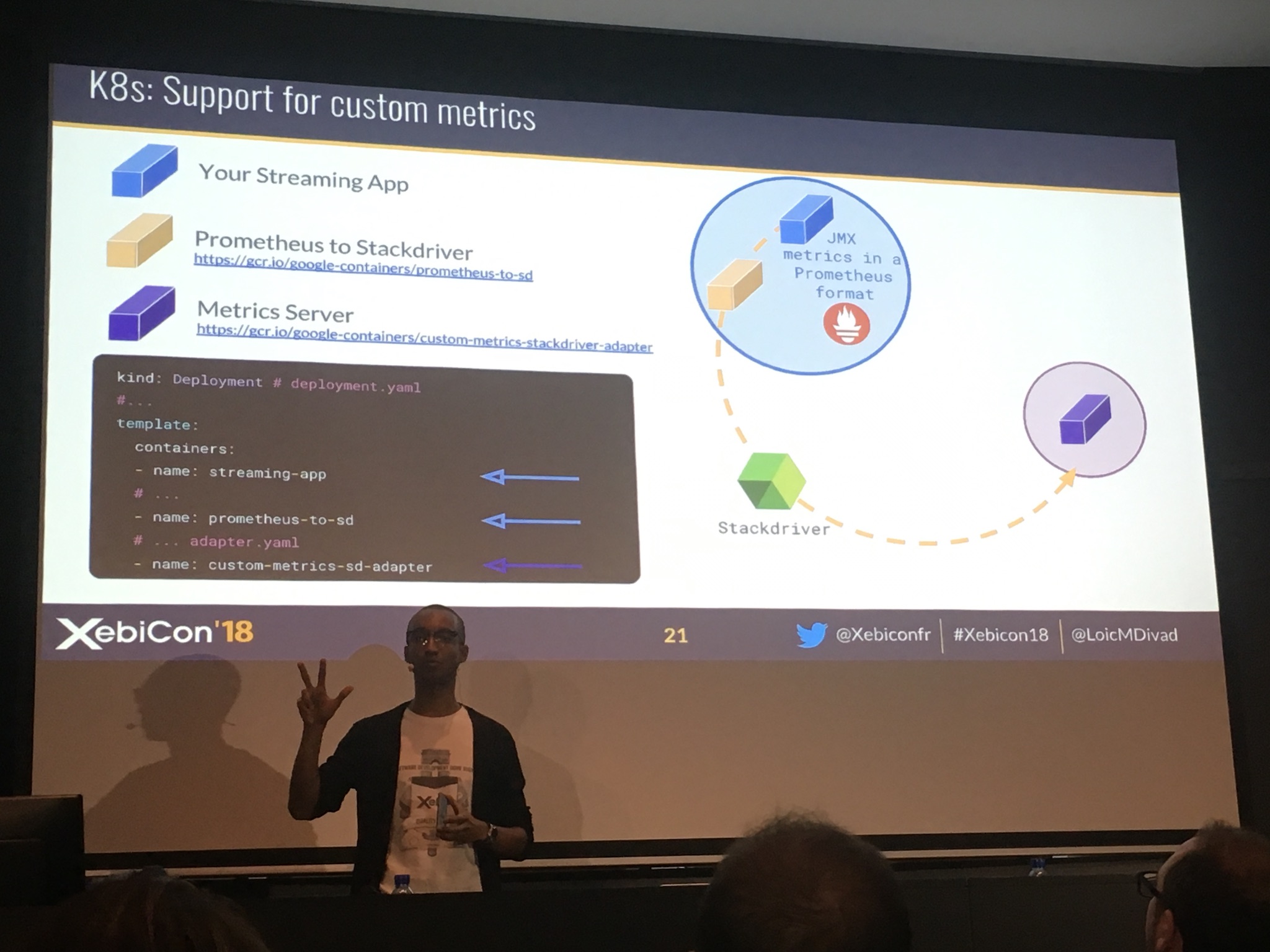 Then came the two blog posts, the first in French and the second in English. The first draft was simply the transcript of the talk, which was really useful.

Doing this demo (and the corresponding blog post) brought me a lot. Not only because I’ve learned a lot, but also because I’ve been stuck halfway on my demonstration and had to figure out how to get things to work. At the time, the two pieces of software I was dealing with, a Kafka Steams application and the Kube custom metrics API, didn’t have a trivial integration. But it had a different dynamic to the story. And now that I can take a step back from it, I think it was one of the funniest demos I’ve created.

Note on Repost Blog: blog.loicmdivad.com is a place to collect all the work I'm doing in software engineering. But to avoid content duplication when an article is published somewhere else (e.g. Medium, corporate blog), I just create a Repost Blog. This type of blog just describes the story of the publication briefly and include a link to it. Repost blog can be recognized by the tag repost . They also have the fr-link or en-link to indicate the language of the initial publication.